CIRCUITS ASSEMBLY recognized companies that received the highest customer service ratings, as judged by their own customers, during a ceremony this week at IPC Apex Expo in San Diego.

The Service Excellence Awards (SEA) results, based on our customers’ input, are another indication of our continued progress in service excellence. Customers of the participants rated each company on a scale of 1 (poor) to 7 (best in class) in five service categories. Kimball Electronics was included in the category for electronics manufacturing services (EMS) companies with annual sales over $500 million"Interest in the SEAs was higher than ever this year, and some new companies emerged to give the incumbents a run for their money," said CIRCUITS ASSEMBLY editor in chief Mike Buetow, in presenting the awards. "In the highly competitive world of electronics assembly, companies are distinguishing themselves with their engineering know-how and responsiveness." 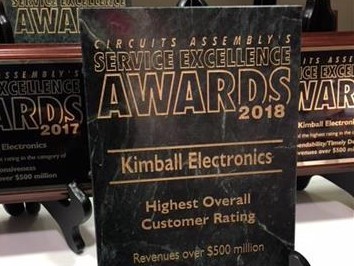 A donation of $4,000 was made on the participants’ behalf to the Surface Mount Technology Association’s Charles Hutchins Educational Grant. Part of each participant’s entry fee was included in the donation.

This is the 26th year CIRCUITS ASSEMBLY has sponsored the awards program.

Newest on top Oldest on top
Load more comments
Thank you for the comment! Your comment must be approved first

STAY IN THE LOOP. SIGN UP FOR OUR NEWSLETTER TODAY.